craft, digital manufacturing and the Deleuzian

Craft and ornament are intimate entities within architecture and their manifestation allows architecture to adopt a multitude of political connotations, crucially those surrounding methods of production. Are designer and worker both to be submitted as servants to an order or style? Perhaps the worker may instead be set free from these shackles to pursue their own craft. But is it necessary to separate the worker and the designer into two camps if “workmanship and design are extensions of each other” (Pye, 1968, p.139)? In an environment of digital fabrication, code can also become craft. Through this, designer and craftsperson become indistinguishable, their hierarchy is dissolved. What does this mean for the pursuit of ornament and luxury in architecture?

This becomes particularly relevant with the “deterritorialisation” of the drawing, where it is detached from its original significance and adopts a new meaning. As the drawing or model becomes a digital entity, it is given the agency to control a machine and directly craft materials. The contemporary designer who digitally fabricates finds themselves in a position where their role is to produce information for machines - they are not limited to the drawing. Instead their role becomes to generate information through which their design can be fabricated.

This information may be a 3d surface from which points, tangents and normals are derived, or it may be something entirely more abstract, such as angles to fold or the speed and vector of a cut. From this we are presented with a mode of making, where “fabrication drawings are not defined by boundaries of representation” (Sheil, 2012a, p.15). Instead we are liberated from the tyranny of the drawing board, guided instead by the morphogenetic capacities of the materials we will craft in much the same way that, prior to computational modelling, structural innovators such as Dieste, Gaudi, Candela or Otto turned to physical models, construction methods or mathematics to define their ornamental forms. Their methods instead engaged directly with the act of making and elevated this act above that of drawing. It is important to distinguish between that which is difficult to draw, yet possible to make, and that which is possible to draw, yet difficult to make (Sheil, 2012b, p.137). The architect as digital maker has no use for the latter.

Whilst it may seem tangential to the concerns of craft and ornament at first, through an investigation into the metaphysics of Deleuzian smooth and striated space, it is possible to discern that the transition from the striated space of the designer to the smooth space of the craftsperson is of vital importance in architecture, ornament and scripting.

In striated space, one closes off a surface and ‘allocates’ it according to determined intervals, assigned breaks; in the smooth, one ‘distributes’ oneself in an open space according to frequencies and in the course of one’s crossings.

Until the advent of scripting, it is arguable that smooth space was solely the domain of the craftsperson, since “a sculptor could get away with never abstracting their work as a set of co-ordinates” (Burry, 2011, p.92). The sculptor has no need for striated space, working instead from their perceptions. Much like the sculptor “an artisan who planes follows the wood, the fibres of the wood, without chasing the location.” (Deleuze and Guattari, 1988, p.409). This enables the navigator of smooth space to follow the material, iterating and ambulating on their intuition. Yet in order for a designer to instruct something to be made they must construct a striated space. For the designer “the metrics of striated spaces is indispensable for the translation of the strange data of a smooth multiplicity.” (Deleuze and Guattari, 1988, p.486). Therefore, whilst the traditional architect may only engage with the striated space and the craftsperson may only engage with the smooth, the digital fabricator may traverse both the smooth and the striated simultaneously.

This nomadic space is one that constructs an aura due to the complexity of its comprehension.

Its uniqueness leads to awe in that which “goes beyond everyday and invites us to embark on a real or metaphorical journey in which our routine is interrupted and the exceptional is a modus vivendi.” (Calefato, 2014, p.10). Subsequently, this is a fundamentally different space which the scripting designer inhabits from his/her Cartesian-bound contemporaries. This difference does not denote superiority, as vocal parametricists may claim, instead it is important to identify that these two modes of working inhabit and create fundamentally different spaces. 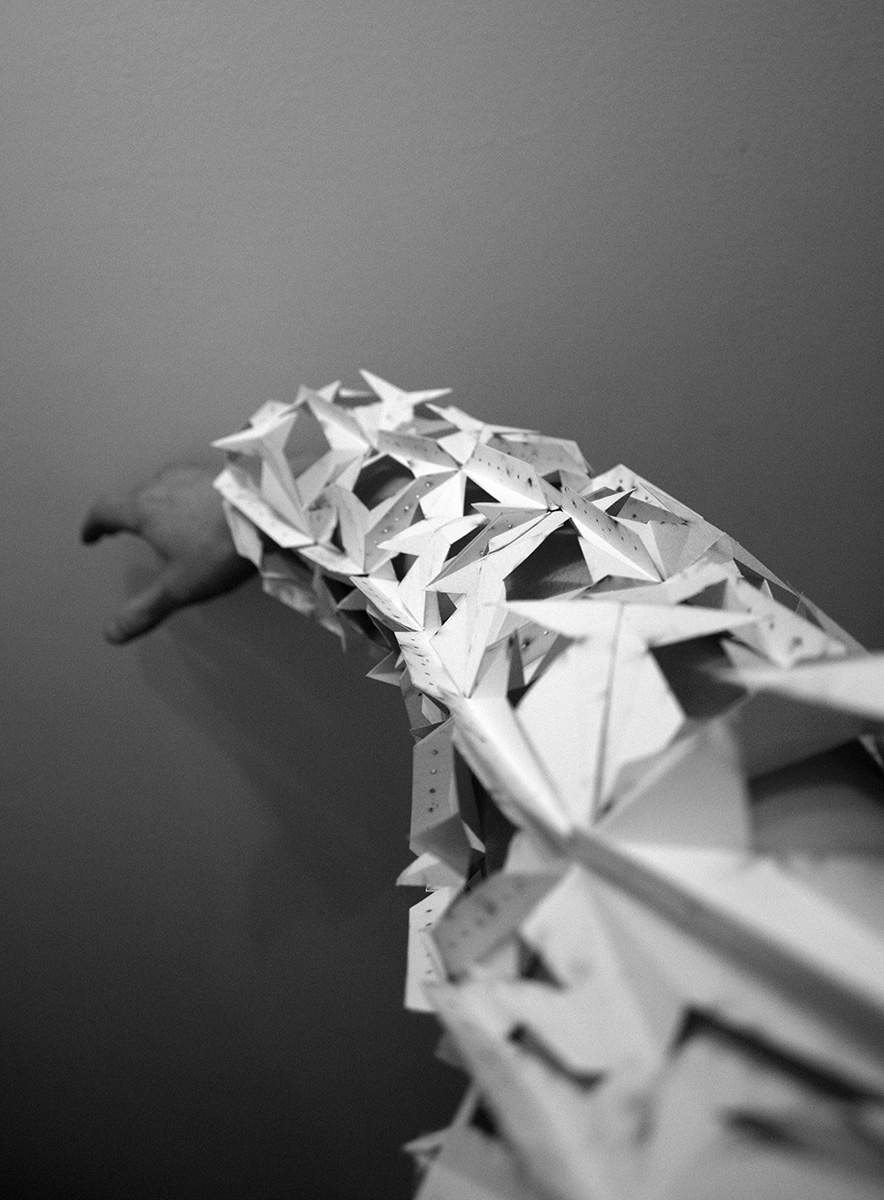 If we are to engage with scripting directly, rather merely appropriating the work of others, this allows for the designer to break free from the formal Cartesian and Euclidean perspectives of a gridded universe (Burry, 2011 p.20). The scripting designer is able to engage with space as a collection of forces, energies and vectors rather than fixed points and matter.

If code is craft, it is possible to re-evaluate the role of the machine in the production of ornament. The use of bespoke code to determine the movements of a CNC tool can be equated to the use of a jig in the hand-production of an object. The CNC machine is no different in its shape-determining nature to that of a lathe, plane or shooting board (Pye, 1968, p.26). “A workman using the workmanship of risk assisted by no matter what machine-tools and jigs can [make alterations] at almost any minute” (Pye, 1968, p.22). The interaction with the computer is no different from any other tool in that it is an experiential one based on “input, output and most importantly feedback” (Colletti, 2013, p.5). So long as the capacities of the material being crafted are not ignored, a craft-lead approach to digital fabrication represents an exciting new methodology for engaging with the production of ornament at an architectural scale. It is the process of working a material in an experiential manner, based on feedback and intuition that distinguishes craft from non-craft. As I hope the work undertaken in my Research Led-Design programme displays, the degree of mechanisation and digitisation of the tools used becomes insignificant in the pursuit of craft.

James Palmer graduated from Oxford Brookes in 2017 and currently

works as an architectural assistant at Mitchell Eley Gould

Sheil, B. (2012a). Manufacturing the Bespoke: Making and Prototyping Architecture. Chichester, UK: Wiley.

Sheil, B. (2012b). Distinguishing Between the Drawn and the Made. In: Menges, A. (ed). Material Computation: Higher Integration in Morphogenetic Design. London: Wiley.